Building on a strong market

As cash grants help Nepali families recover from the April 2015 earthquake, a vibrant marketplace for goods and services provides a foundation for recovery.

Francis Markus is a writer, journalist and communicator based in Kathmandu, Nepal.

In the green-carpeted hills overlooking the Sun Koshi River, about four hours’ drive south-east of Nepal’s capital, Kathmandu, Pabitra Bhujel looks on as workmen begin work on the foundation of her new home.

For the widowed mother of three, life in the makeshift, metal-roofed cottage she has shared with her children and mother-in-law since the April 2015 earthquake has been difficult: cold in the winter, broiling in the summer and “the rain drumming on the roof makes a noise that keeps us awake at night”.

Work on Bhujel’s new home began almost immediately after she, and five neighbours, each received 70,000 Nepali rupees (US$ 645), the first tranche of a cash grant from the International Red Cross and Red Crescent Movement that will help them to begin work on earthquake-resistant foundations.

They are to receive further instalments for the walls and roof once this has been done in compliance with government guidelines, so they can complete the structure.

The grants are the latest in a series of Movement cash transfer programmes, implemented in this mountainous country since the April 2015 earthquake and its aftershocks, which killed nearly 9,000 people and left around 600,000 houses destroyed and another 285,000 damaged.

From the beginning, cash has been a critical part of the Movement’s overall emergency response in Nepal, together with the provision of food, water and sanitation, healthcare and basic household items. Just a couple of months after the quake, more than 41,000 families received unconditional cash grants to buy desperately needed shelter materials. Further payments in December 2015–January 2016 helped nearly 50,000 families purchase winter clothes and blankets. Some of the most vulnerable farming families have also been given grants for tools and seeds to help them restart their livelihoods.

As the provision of unconditional cash in emergencies becomes increasingly common, the Nepal experience has shown that when local markets are still functioning, cash can provide a quick and effective way to get aid directly to people in need at times when disruption and damage to key infrastructure make distribution of supplies costly and difficult — particularly in remote, mountainous areas.

“Unlike in many other countries `{`after a disaster`}`, the markets in Nepal didn’t collapse.”

Umesh Dhakal, head of the Nepal Red Cross Society’s Earthquake Response Operation, noting, however, that after the quake there was an immediate shortage of commodities such as tents and tarpaulins

As the Nepal Red Cross Society and its Movement partners begin providing cash to help people rebuild their homes in a more earthquake-resistant manner, they will be looking carefully at local markets for material and labour to ensure the job can be done correctly. Fortunately, those markets, which have been a critical asset in the country’s recovery, continue to function adequately even if there have been shortages of some important materials.

“Unlike in many other countries [after a disaster], the markets in Nepal didn’t collapse,” says Umesh Dhakal, head of the Nepal Red Cross’s Earthquake Response Operation, noting, however, that after the quake there was an immediate shortage of commodities such as tents and tarpaulins.

“Even the rich with their big houses and their fleets of cars were in the streets at that time,” he says, “so there was no difference between rich people and poor people” as everyone scrambled to buy whatever supplies were available.

This is not to say the markets weren’t under stress. Natural disaster and political tensions combined to add to survivors’ woes as discontent over Nepal’s proposed new constitution triggered a blockade of the country’s vital border with India. Constricting the flow of goods and driving up the price of fuel and other vital goods, “the blockade had a massive impact on the markets”, says Max Santner, head of the IFRC’s Country Office.

In such situations, aid workers must also pay attention to what infusions of cash might do to local economies. Will they increase demand for certain goods and, therefore, drive prices higher? Santner feels the IFRC’s cash infusions — while very important to individual families — have not played a significant role in causing inflation when compared to other, much larger, market forces.

Post-distribution monitoring after the winter cash grants’ distribution showed that 95 per cent of respondents felt prices had indeed increased since the cash was given out. This is hardly surprising, however, given the price hikes in fuel caused by the blockade, on top of a history of steady inflation in recent years.

Further, a close examination of price trends in local markets revealed a more complex picture, according to IFRC delegate Jordane Hesse. “During the operation, [local Red Cross branches] tracked prices in the field for specific items like blankets and winter jackets, and also rice and sugar,” says Hesse. “There was a mix of trends depending on the location — some increases, some decreases and, in some cases, an increase followed by a decrease in prices.”

Such price tracking is an important part of understanding what effect cash transfers are having — or not having — on local economies. Another key aspect is understanding what cash grants mean for each individual household. According to Anita Ghimire, a Nepali researcher who studies social protection issues, cash grants free up resources for people to devote to longer-term livelihood needs.

After the earthquake, she says, “the first priority after basic food, clothes, medicines, etc., was investing in rebuilding infrastructure such as lost houses and sheds for cattle”. Without the cash grants, such as those given for home reconstruction, there might have been a “tendency to invest much less in strategic long-term livelihoods activities, so local markets would suffer more”.

Understanding broader market dynamics — including the regulatory environment, the availability of labour and the quality and quantity of essential materials — is also critical, especially when dealing with the more complex challenges associated with rebuilding homes in an earthquake-prone country.

After a disaster that laid bare many of the problems and disparities in Nepal’s housing stock, the motto often invoked by the Global Shelter Cluster — to ‘build back better’ — takes on particular meaning. Given the scale of the reconstruction efforts and the relative shortage of required labour, the idea of building back better is one reason various components of the Movement have trained some 4,000 masons and recruited more than 40 engineers or junior engineers to help with the task.

As cash reconstruction grants are provided, each mason will work with six or seven labourers and each engineer will be stationed in one of the worst-affected communities to help provide technical support. The engineers’ role will be a delicate one, making sure householders understand what’s at stake and helping to mobilize support for earthquake-resistant construction, although the final inspections (and recommendations for further cash instalments) will be made by local government officials.

Getting things done properly is not just a technical challenge, however. The Red Cross engineers have also received training from Nepal Red Cross staff in community engagement and mobilization in order to better communicate why certain expenditures must be made. “It’s as much social engineering as civil engineering,” says Laxman Chhetry, the IFRC’s senior construction coordinator and adviser in Nepal.

Graham Saunders, team leader, Global Network and Operation Practice in IFRC’s Disaster and Crisis Prevention, Response and Recovery Department, based in Geneva, agrees: “It’s as much about a mindset and understanding as it is about the technical aspects,” he says. “The homeowners need to understand why safety is an issue; why, for example, money should be spent in the ground [on the foundations], an absolutely critical part of earthquake-resistant building but which you can’t see.”

50,000 NPR (US$ 460) for the roof.
To be provided once construction of the foundation and walls is complete, in compliance with government building codes and earthquake-resistance guidelines.

80,000 NPR (US$ 748) for the walls.
To be provided once construction of the foundation is complete, in compliance with government building codes and earthquake-resistance guidelines.

The Red Cross Red Crescent cash transfers account for just part of the more than 500,000 homes that need rebuilding, with the rest being supported by the government and other actors.

Saunders has also served as IFRC’s liaison to the Global Shelter Cluster, which the IFRC co-chairs and which recently published a position paper on cash and markets in the shelter sector. The paper explains why there is still some reluctance to engage in unconditional cash grants when dealing with shelter.

“The use of unconditional grants does present opportunities for a certain range of shelter activities such as the provision of emergency NFIs [non-food items], tools and basic materials,” the paper concludes. “However, there is significant concern from within the shelter sector that the increasing momentum behind CTP [cash transfer programming] and in particular unconditional multi-sector grants, does not take some of the specifics, complexities and technical challenges of construction into consideration.”

In other words, says Saunders, the skills, experience, knowledge and materials needed to build back safely in an earthquake-prone area is a far more complex proposition than providing grants for food commodities. “When you turn to shelter and construction, you see the risks that people can put themselves under if you simply give them US$ 1,000,” he says.

Further, natural disasters and other shocks often lead to unexpected side effects that can complicate an already challenging task. After the earthquake, for example, the number of Nepalis working overseas — and who account for roughly a quarter of the country’s gross domestic product — increased significantly. Finding the engineers and workers needed to rebuild hundreds of thousands of homes will be a daunting task for the multiple aid groups, private builders and government agencies involved in the reconstruction effort.

And then there’s the question of energy production. The non-governmental organization Practical Action analysed markets for various construction materials and found that Nepal’s chronic power shortage “is likely to have a significant impact on production capacity of cement, rebar and corrugated iron”, according to project officer Rabindra Singh. “Many factory owners are procuring high-capacity generators, but this will, of course, drive up the costs.”

Given these dynamics, the ongoing impacts of cash disbursements for shelter will have to be monitored closely. For the Nepal Red Cross Society, the experience with cash programming so far has shown it to be a sound response that offers the flexibility needed to deal with changing conditions in a diverse landscape. The challenge now is to continue to keep a close eye on markets, keep in touch with recipients and monitor building processes carefully so the amounts of cash or in-kind material assistance can be adjusted accordingly. As the Nepal Red Cross’s Umesh Dhakal puts it: “We have to find the right balance.”

Nepali carpenter Jhamka Bahadur Sarki says, “I want to build a good strong house”, as he watches a group of labourers at work on the foundations of his new home. The work is funded by a cash grant programme administered by the Nepal Red Cross and the IFRC.
Photo: Francis Markus/ICRC

Previous
The cost of violence
Next
Publications issue 3 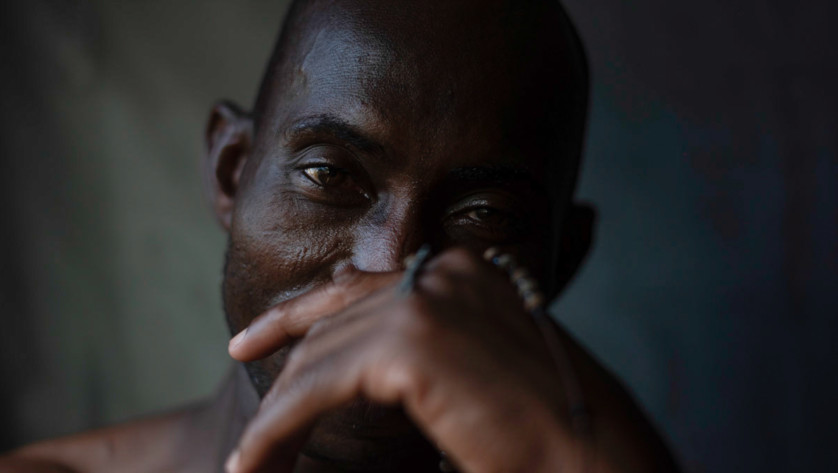 A new nightmare for African migrants with an American dream

Migrants from Africa and beyond are now trapped by pandemic in Latin America, stuck in limbo while waiting for their chance at a better life.