A fishing boat washed up by the 2011 tsunami sits next to black plastic bags containing radiated soil, leaves and debris collected during decontamination operations near the crippled reactor in Fukushima. Photo: REUTERS/Toru Hanai

Preparing For the worst

Masayuki Kanno once wondered what would happen if there were ever an explosion at one of the nuclear power plants in his home prefecture of Fukushima. As a member of a medical relief team at Fukushima Red Cross hospital, he asked a senior staff member how the teams would cope in the aftermath of such a disaster.

“If there is a radiation leak, nothing can be done,” Kanno recalls his superior telling him. “There is nothing we can do. However, a nuclear power plant accident will never happen.”

That attitude reflected the complacency towards nuclear energy that was prevalent in many countries, including Japan, before the catastrophic events five years ago, on 11 March 2011, when a magnitude 9.0 earthquake triggered a series of tsunami waves that slammed into Japan’s north-eastern Pacific coast, killing thousands and crippling the No. 1 Fukushima nuclear power plant.

Nuclear plants provided around 30 per cent of Japan’s electricity before March 2011 and, according to Masahito Yamazawa, director general of the Japanese Red Cross Society’s Nuclear Disaster Resource Center (NDRC), the country had total faith in the industry. “We could only think of a nuclear accident as being a slight possibility,” he says. “We could not think of it as a probability.”

Like many in Japanese society, the Japanese Red Cross was not ready for what unfolded in the days after 11 March. Shoichi Kishinami, director of operations at the Japanese Red Cross’s Fukushima chapter, realized this the next day, when he began receiving calls from concerned relief teams working at evacuation centres in Minami Soma, around 30 kilometres north of the nuclear plant.

“I felt a lot of pressure and worry about not knowing enough about radiation and radiation exposure,” says Kishinami, 56, who has been with the Japan Red Cross for 38 years. “We had had no training in how to operate after a nuclear accident and it was frightening to deal with that kind of invisible threat.”

Eventually, he ordered the teams to withdraw temporarily from the area. Ayumi Watanabe was a member of a Fukushima Red Cross hospital relief team. “With mixed feelings of guilt and a sense of fear of the radiation, we forced ourselves to move [further away] to Kawamata,” the nurse later recalled. “My heart was nearly broken with sorrow.”

“That dilemma of having to leave communities behind was the motivation for the Japanese Red Cross to establish its nuclear disaster guidelines,” says Yamazawa, 61, who joined the National Society in 2011 after a career in Japan’s civil protection forces.

“With mixed feelings of guilt and a sense of fear of the radiation, we forced ourselves to move `{`further away`}` to Kawamata. My heart was nearly broken with sorrow.”

On 13 March, a day after a hydrogen explosion in one of the reactor buildings, the Red Cross relief teams that had travelled to Fukushima from around Japan decided to move to areas outside the prefecture. Without the proper training and equipment for working in a radiological environment, they didn’t feel comfortable. “I was grateful to all the teams,” says Kishinami. “They didn’t want to leave, but they couldn’t work under those circumstances.”

Two years later, the Japanese Red Cross had the tools in place to begin the work of ensuring its relief teams, made up of doctors, radiological technicians, nurses and administrative staff, wouldn’t be left vulnerable again. The organization released a nuclear disaster manual and equipped its 498 relief teams in all 47 chapters with the necessary protective suits and devices for measuring radiation. The Tokyo-based NDRC was set up later that year.

Under Yamazawa, the NDRC established a set of guidelines for preparing for and responding to nuclear emergencies. These have been issued to all Japanese Red Cross staff and local volunteers. It also created an online archive of related data in both Japanese and English and launched a nuclear disaster response training programme to educate its relief teams in the fundamentals of radiation, contamination, safety and protective equipment use. So far, around 400 first- and second-wave responders have received the training.

“If we know the radiation basics and how to use the protective gear, then we can face the next disaster with more confidence,” says Yamazawa.

The Fukushima disaster also spurred the IFRC, at its 2011 General Assembly, to adopt a resolution to better prepare for chemical, biological, radiological and nuclear emergencies (CBRN). Such disasters pose particular challenges and risks for first responders while preparing for them requires a significant investment of time and resources due to the specialized knowledge needed for an effective and safe response.

Such investment is essential, stressed Simon Eccleshall, head of disaster and crisis management for the IFRC. “With ageing infrastructure in many parts of the world, technological hazards unfortunately are expected to increase,” he says. “Urbanization and industrialization compound the vulnerabilities to such disasters while climate-related events can bring additional threats to technological infrastructure.”

In some cases, preparing for such disasters does not necessarily mean the creation of entirely new specialist teams or response systems. Martin Krottmayer, head of IFRC’s CBRN Emergency Preparedness Programme, says radiological and nuclear hazard preparedness should complement a National Society’s existing services.

“We had had no training in how to operate after a nuclear accident, and it was frightening to deal with that kind of invisible threat.”

“For example, a National Society running ambulance services should be aware of how to handle contaminated patients,” he says. “National Societies should identify beforehand the relevant experts in the country they would need for specialized support and engage actively in the Red Cross and Red Crescent CBRN network” (see article on page 19).

But how much should governments and National Societies invest in training and equipment, especially when faced with limited resources and, in some cases, a range of other complex humanitarian issues to manage? It’s a complex question, particularly since technological disasters tend to be less frequent.

“These kinds of disasters are unlikely to occur, but if they do, the impact is extremely great,” says Rene Nijenhuis, head of a joint unit of the United Nations Environment Programme and the UN’s Office for the Coordination of Humanitarian Affairs that deals with technological disasters.

Nijenhuis says coordination, preparation and partnership are particularly critical in the case of technological disasters. In many industrialized nations, he says, there are now numerous specialized responders — from firefighters to chemical and biohazard units — that will play a role in the immediate response. Because the humanitarian consequences are likely to be severe, organizations providing shelter, food and medical support need to be fully integrated into any disaster-management scenario.

In the city of Nihonmatsu, in Fukushima prefecture, a Japan Red Cross volunteer is screened for radiation after the 2011 earthquake and tsunami, which caused significant radiation leaks at the Fukushima Daiichi Nuclear Power Plant. Photo: Japan Red Cross

The Japanese Red Cross already played a unique role in the nation’s response to radiological disasters due to its history following the Second World War. Since the Fukushima crisis, the NDRC has established a team of specialist advisers, drawn from Japanese Red Cross hospitals, including two in Hiroshima and Nagasaki, established to help people suffering long-term effects of radiation from the atomic bombs dropped on the two cities in 1945. In the event of a nuclear accident, these experts would be dispatched to the Red Cross’s national headquarters and the affected local area.

Last September, the National Society launched the next phase of its preparedness, with a two-day exercise in Fukushima. Some 200 staff and 200 volunteers from across northern Japan simulated a natural disaster on the first day and a nuclear disaster on the second.

While Kishinami says the relief teams in Fukushima now feel far better prepared to provide help in any future nuclear disaster zone, he thinks the teams should each be led by an experienced nuclear disaster specialist.

Five years after one of Japan’s greatest catastrophes — a combination of a man-made and a natural disaster — the National Society is in a much better position to react. “If we were in an 11 March situation now, I feel confident we could handle it,” says Kishinami.

Five years after the Fukushima nuclear accident, the Japanese Red Cross Society offers activities that aim to bring a sense of community and normalcy back to people uprooted by the disaster. Here, a resident of the Minamiyanome temporary housing compound makes a flower arrangement as part of a social event organized by the Japanese Red Cross’s Fukushima branch. Photo: Hler Gudjonsson/IFRC 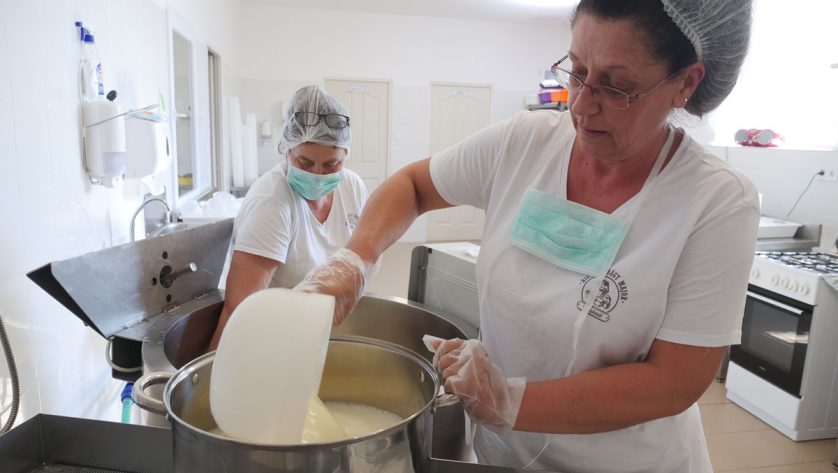 From goats to gourmet

A small farm in north-eastern Hungary is giving a boost to hard-hit people and putting locally produced cheeses on the gourmet map.