Will we ever be able to say ‘never again’ to drought, famine and violence in sub-Saharan Africa?

OVER THE PAST TEN YEARS, numerous global agreements on disaster risk reduction, climate change, sustainable development and humanitarian response have sought to change the aid paradigm. One key goal, is to prevent or at least better prepare communities for crises such as those befalling much of sub-Saharan Africa while also making the humanitarian response more timely, robust and effective. With famine, disease and conflict once again unfolding before the world’s eyes in Africa, many are looking at how to put the lofty goals of the global agreements into action. Here are just a few of the ideas being discussed, tested within the humanitarian sector.

Flexible and forecast-based funding
In Ethiopia and Somalia, the United Nations Office for the Coordination of Humanitarian Affairs (UNOCHA) manages unearmarked donor funds, which are deposited into a pool fund. The money is linked to a humanitarian response strategy already agreed upon by various agencies so the funds can be disbursed faster and be tapped by local actors.

This is one example of something referred to as “flexible funding” because it’s not tied to any pre-conceived project or agenda and gives aid groups more flexibility in responding to needs on the ground.

One challenge, however, is to know how much flexible funding should be provided and when, particularly if the goal is to prevent or prepare for upcoming emergencies. One potential solution is something called Forecast-based Financing (FbF), in which funding is provided in advance based on weather modelling predictions.

The IFRC and the German Red Cross are testing just such an approach in five countries where money has been released prior to predicted climate events to reduce risks, enhance preparedness and response, and improve disaster risk management.

In Uganda, forecast-based financing was rolled out in 2014 with flexible funding from the German government. When forecasts predicted water levels rising beyond a specific threshold in the eastern part of the country, Uganda Red Cross Society volunteers distributed water purification tablets, jerry cans, storage sacks and soap to hundreds of potentially affected families.

Satellite photos later showed the forecast was accurate, with flooding occurring approximately one week after the volunteers carried out their preparedness activities. While the National Society issued an emergency appeal for funds within their own country, it never requested additional international support.

Investing during times of plenty and peace
When the emergencies subside, and international attention moves on, governments, humanitarian organizations, development actors and donors must take advantage of the relative peace and prosperity and invest far more heavily in efforts to prevent and prepare for times of conflict and scarcity.

Investment in community-based water delivery systems, early-warning systems, water-efficient agricultural production and transport systems that allow food producers to reach markets are all essential in order to avoid a repeat of 2017’s disasters, says Farid Aiywar, head of disaster and crisis prevention, response and recovery for the IFRC in Africa. “This also means improved management of water systems during times of excess rain, which can be stored and then released during times of drought,” he says.

Kathy Mueller is a humanitarian, writer and communicator based in Canada.

Investing in peace
None of these initiatives can bear fruit if communities are continually under threat. With this in mind, some say peace-building efforts should also be part of the humanitarian-development mix. The South Sudan Red Cross, for example, has launched a Peaceful Coexistence Project, in which they hope to help broker communication, understanding and perhaps peace among various factions.

To have a meaningful and lasting impact, this now very small project would need to be scaled up massively in order to take root and prevent future cycles of conflict and vulnerability. And even if South Sudan or other countries in conflict achieved peace tomorrow, the humanitarian situation will not go away. There will still be a massive need for international support to help those suffering under the current crises to restore and rebuild their lives.

A seamless handover
As the situation on the ground allows some international actors to ease up their emergency, life-saving operations, some say smoother transitions from international to local solutions are also important.

This means humanitarians address the acute needs but then are “able to hand over the baton to development partners so that there’s continuity and also the building of the population’s resilience in terms of long-term programming”, says Luluwa Ali, a humanitarian affairs analyst with UNOCHA in eastern and southern Africa.

The problem is that many large international agencies lack a deep-rooted, continuous network at the local level. “The infrastructure to follow up, monitor, tweak the system, is not there,” says Tim Wright, executive director of Sauti Moja, a small non-governmental organization (NGO) that connects donors to community initiatives of indigenous people such as the Masai of Kenya and Tanzania.

“The big agencies can do the initial emergency work but they need to make sure they have small local partners engaged to do the follow-up and monitor,” he says. This sentiment echoes the case made by Red Cross and Red Crescent National Societies, which argue that their community-based volunteer networks are ideally placed to provide just that kind of continuous follow up, as well as disaster preparedness, emergency response and recovery, and resilience building at the local level.

Investing closer to home
The dialogue on improving the lives of the most vulnerable people in Africa has, for years, focused on encouraging Africa to write its own story and to promote investment and resilience building from within. In this spirit, National Societies have pledged to diversify their local and regional donor base and to knock louder on the door of the local private sector, among other things.

One outcome, just over 18 months old, is the East Africa Humanitarian Private Sector Partnership Platform. The platform has more than 160 members ranging from the private sector to local and multinational businesses, academia, the United Nations, international NGOs, local actors and government.

Coordinating such a large group is a monumental task, particularly when many of the most essential stakeholders — national governments — are themselves to varying degrees in states of crises.

Still, many governments are stepping up. While some have been slow to acknowledge that the magnitude of the disaster was beyond their capacity, there has nevertheless been massive investment, such as in Ethiopia where the government has allocated more than US$ 730 million to address critical humanitarian needs.

More National Societies, meanwhile, are finding ways to reach out to their fellow countrymen and women for support. Following the success of the Kenya Red Cross Society’s ‘Kenyans for Kenya’ fundraising initiative during the 2011 drought, which raised more than US$ 10 million through small donations by cell phone, National Societies in Namibia and, more recently, in Ethiopia have followed with similar initiatives.

Two faces of resilience building before and during crisis: With help from the Kenya Red Cross, along with sister National Societies and international donors, John Paul Kuzungu was able to install a new irrigation system for his farm, now once again generating income and feeding nearby families. The drought had turned all several nearby reservoirs into bone-dry moonscapes. Meanwhile, in another part of drought-affected Kenya, Joyce Eldoret, prepares to spend some of the grant she received as part of a cash-transfer program organized in partnership with a national mobile communications company.

Previous
Publications 2-2017
Next
Uniting for humanity 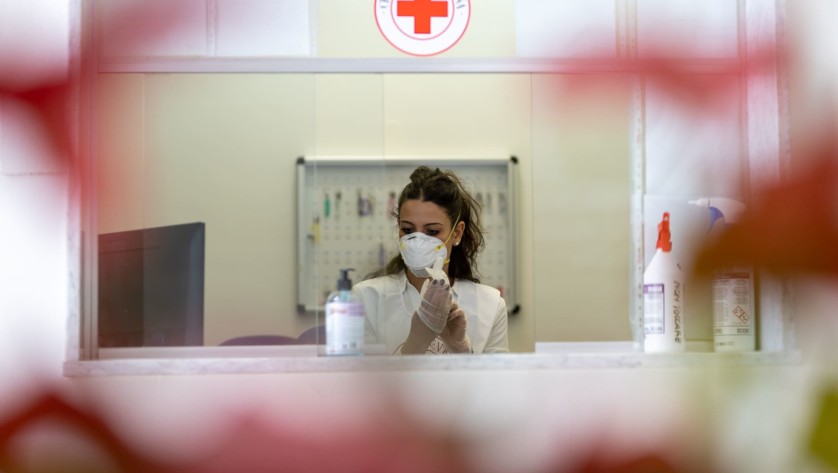