Click the image above and listen to this story | 29:32

Even on this crowded planet, there are places on Earth where one could argue that even the notion of humanity is all but nonexistent. Where the human element is so scarce and the environment so harsh, you might as well be in the void of space. This special RCRC magazine podcast is a journey into one of those places: a vast, empty seascape in the heart of the Mediterranean Sea.

We’ll travel with photographer and videographer Alexia Webster (on the photo) aboard the Ocean Viking, a ship chartered by the humanitarian group SOS Mediterranée in partnership with the IFRC that has the singular mission of rescuing people who find themselves lost or shipwrecked in  international waters between Europe and Africa.

Produced as an interview with RCRC magazine editor Malcolm Lucard, it’s a story about the people who end up in a place where every year thousands of people lose their lives as they try to find safety and a better life in Europe. They are people like Hayelom, a young man from Ethiopia who wind up lost at sea because they had no other choice.

“I tried to imagine what made me try to cross the sea. I have to be crazy to do this,” says Hayelom, who fled to Sudan when fighting broke out near his hometown. Once in Sudan, he says he was kidnapped and taken to Libya, where he was arrested and put in prison. Fearing for his life, he says he escaped and got on a rubber dinghy with 140 others. “Either way you will die,” he recalls thinking at the time. “So we said, ‘at least we will die doing something that we choose, to die trying, instead of waiting for nothing.’ ”

This is also a story about the people who feel compelled to bring some humanity to these waters, because they simply can’t imagine leaving people alone to die this immense empty wilderness. “Can you imagine drifting night and day without seeing sight of any land or anything?,” asks Luisa, who serves as SOS Mediterannée’s rescue coordinator aboard the Ocean Viking. “Maybe you can see a big ship passing by, and you maybe try to wave, but no one is helping you.”

“It’s just another world at sea,” adds Dragos, a former journalist who is now part of the SOS Mediterranée’s search and rescue team.  “You don’t see people there so it’s like a lawless space. Anything can happen. There are no police like you would have in a city or even in the countryside. You don’t encounter anybody.”

“Can you imagine drifting night and day without seeing any sight of land or anything.
Maybe you can see a big ship passing by and maybe you try to wave but no one is helping you.”

The Ocean Viking is sometimes referred to by its crew as “a floating ambulance”, where doctors like IFRC’s Marie Munoz-Bertrand offer critical medical services to people whose bodies and minds have endured tremendous hardship, deprivations and shock.

“Even in the best conditions, there will be changes in language, temperature and foods,” she says. “In the worst conditions, you have very hard living conditions and sometimes quite severe losses, trauma and injuries.”

With the help of audio clips from her interviews, Alexia introduces us to asylum seekers like Hayelom and from crew members of the Ocean Viking, people like Abdel, the IFRC post rescue facilitator, who has spent much of his life in recent years at sea trying to prevent even more lives from being lost.

“The only sentence they want to hear is ‘You are safe,’ ” says Abdel, referring to shipwrecked people who are picked up by the Ocean Viking. “’You are safe’ means you are not going back to Libya. For them. this is an important moment. So I choose my word is very well. I tell them this with respect and dignity and they believe me.”

Part of Abdel’s job is also also to prepare the rescued migrants for what to expect as they start their new lives on European soil, where they confront a new series of challenges. Hayelom says he knows life in Europe will not be easy but he’s grateful to be safe and to still have the chance to realize his most fundamental aspiration. 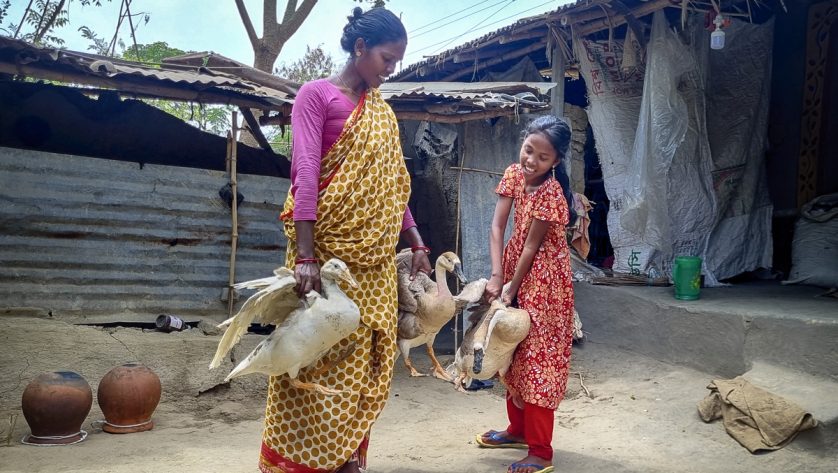 Previous
A river that gives and takes