As of today, 50 countries have ratified a treaty that bans nuclear weapons, a significant milestone that adds momentum to the movement toward the ultimate elimination of nuclear weapons.

Seventy-five years ago this year, a nuclear weapon was used for the first time in warfare. Dropped from an American B-29 bomber on the port city of Hiroshima in western Japan, the bomb wiped nearly the entire city was off the map. Some 70,000 people were killed in the blink of an eye on that hot August morning in 1945.

Incredibly, a few dozen buildings within 5 kilometres of ground zero survived the blast.

One of them was the Hiroshima Red Cross Hospital. Located 1.5 kilometres from the bomb’s hypocentre, the reinforced concrete building was severely damaged, with part of its roof collapsed and all its windows blown in.

Within hours, thousands of badly burned, injured and sick people flocked to the site.

“One of the Japanese doctors told me that a thousand patients had been taken in on the day of the disaster,” ICRC delegate Marcel Junod wrote in his journal at the time. “Six hundred had died almost immediately and had been buried elsewhere, in the immediate vicinity of the hospital.”

By the end of the year, the death toll had risen to 140,000, with many victims succumbing to the effects of radiation sickness. Still, the hospital was able to save and care for many thousands of patients over the years and today it stands as a reminder of the lingering impact of nuclear weapons.

The Hiroshima Red Cross Hospital and Atomic-Bomb Survivors Hospital — as it’s called today — has the display of the bomb-blasted structure remains in its memorial park outside the hospital .

Aside from treating hibakusha, as the survivors of the atomic bombings of Hiroshima and Nagasaki are known, the hospital has been also a source of psychological support for them.

“I’ve heard that the existence of the hospital itself gave survivors great emotional comfort,” says Dr Yoshinari Furukawa, the current president of the hospital. “And I hope that this is still the case.”

Over the decades, the Atomic-Bomb Survivors Hospital in Hiroshima and its equivalent institution in Nagasaki, which opened in 1969, have handled millions of inpatient and outpatient visits.

Doctors and researchers at both hospitals, together with experts at Hiroshima’s Radiation Effects Research Foundation and other hospitals in the two cities, have accumulated a vast amount of knowledge on the long-term physiological effects of radiation released by nuclear weapons.

In the years after 1945, for example, cases of leukaemia and other types of cancer began to rise, including in young children who had been exposed to radiation.

“I think that the terrifying experience [of the atomic bomb], as well as keloids [burn scars], placed a massive burden on the mental development of children ,” says the 65-year-old Furukawa, who has worked at the Red Cross hospital since 1988.

“I believe that Hiroshima has an obligation to educate the world on the devastating effects of an atomic bomb to help prevent such a tragedy occurring again,” Furukawa says.

“It is also important for us to contribute to the medical care for victims of radiation, including the victims of nuclear power plant accidents, and to promote international cooperation.”

The impact of the hospital’s work has been far-reaching. It helped establish safe radiation dose guidelines for industries like nuclear energy, which was crucial during the Fukushima crisis in 2011, when a nuclear power plant in northeastern Japan was hit by earthquake-triggered tsunami waves. The hospital dispatched six doctors and nine radiological technicians to the prefecture to advise Japanese Red Cross medical relief teams.

On the left, Dr Yoshinari Furukawa, president of the Hiroshima Red Cross Hospital and Atomic-Bomb Survivors Hospital. On the right, the hospital as it looks today. | Photo: Japanese Red Cross Society

Furukawa hopes the hospital’s legacy will play a role in the growing movement toward a complete elimination of nuclear weapons. Having treated the victims of the world’s first nuclear attack for more than 30 years, Furukawa is unambiguous about the need for a ban on weapons with such massive and long-term destructive power.

“Humankind has made many mistakes in the past, but I think one of the biggest mistakes was the use of atomic weapons,” he says.

There are more than 13,000 nuclear weapons in the world today and they are far more powerful than the bomb dropped on Hiroshima. Any modern-day use of those weapons, Furukawa, would be cataclysmic.

“I would hope that people all over the world can realise the inhumanity of nuclear weapons and learn the lessons of [Hiroshima and Nagasaki]. But this isn’t easy. I think we first have to recognize the importance of understanding and respecting one another in order to eliminate the conflicts that can ultimately lead to the use of nuclear weapons.”

“I hope that more of the world will understand the inhumanity of using nuclear weapons and we will see their elimination in the future. That’s why we must continue to share the facts of what happened in Hiroshima.”
Dr Yoshinari Furukawa, president of the Hiroshima Red Cross Hospital and Atomic-Bomb Survivors Hospital

A big step for the ban

Today, the world took a significant step in that direction. The UN’s Treaty on the Prohibition of Nuclear Weapons (TPNW) would ban nuclear weapons entirely and, so far, 84 countries have signed the treaty.

But it needs to be ratified by 50 of those signature countries in order to go into force, a milestone that is expected to be announced today (24/10/2020) during a special signatory session at the United Nations General Assembly in New York.

But without the participation of the nuclear-armed states, a significant reduction in existing nuclear arsenals is unlikely to happen anytime soon. Today’s announcement, however, means that the treaty will become binding in 90 days and it adds considerable momentum to efforts to persuade more countries to sign and, ultimately, ratify TPNW.

The news will be very much welcomed by many like 86-year-old Reiko Yamada, one of many Hiroshima atomic bomb survivors who have been advocating for the prohibition treaty for many years and who spoke to Red Cross Red Crescent magazine about her experience and the treaty during an interview earlier this year.

“During the bombings of Hiroshima and Nagasaki, so many people were indiscriminately killed and entire cities were utterly destroyed,” says Yamada, who was 11 years old when the first atomic bomb was dropped on Hiroshima 75 years ago. “Today’s far more powerful nuclear weapons have the capability of wiping out any kind of future for human life and the planet.”

Furukawa agrees that the campaign to prohibit nuclear weapons is critical given the power of today’s nuclear weapons compared to the bombs dropped on Hiroshima and Nagasaki 75 years ago.

“If a strategic nuclear weapon were used on Hiroshima today, it would definitely cause catastrophic destruction over a wide area of the city and beyond,” he says. “There would be millions of deaths. If one were used on Tokyo, tens of millions of people would be affected across the surrounding Kanto region.”

“I hope that more of the world will understand the inhumanity of using nuclear weapons and we will see their elimination in the future,” he says. “That’s why we must continue to share the facts of what happened in Hiroshima.”

Reiko Yamada (third from left, in white dress) was 11 years old when the first nuclear weapon was dropped over her home city of Hiroshima, Japan. | Photo of Reiko today: Nick Jones 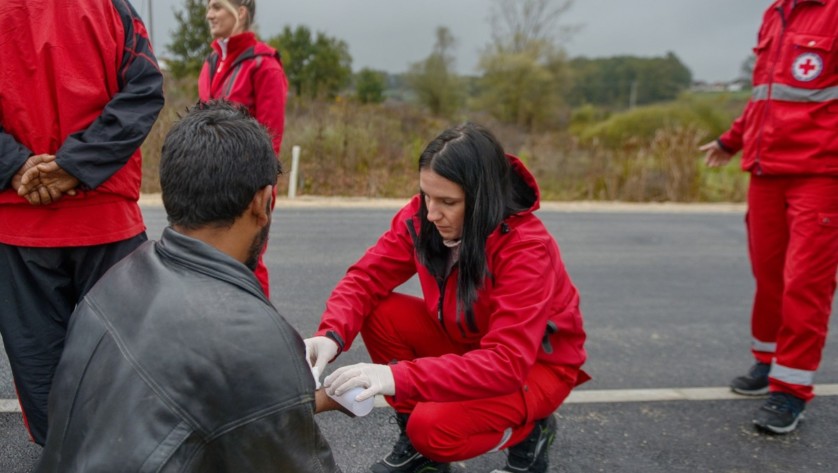