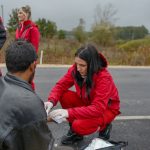 Deadly avalanchesFollowing heavy snowfall in parts of Afghanistan and Pakistan in February, at least 120 people were killed by avalanches that destroyed or damaged dozens of homes. In the north-eastern Afghan province of Nuristan, bordering Pakistan, at least 45 people in one village perished under an avalanche. “In the village of Afsye, Bargematal district, 70 [...]
Read More