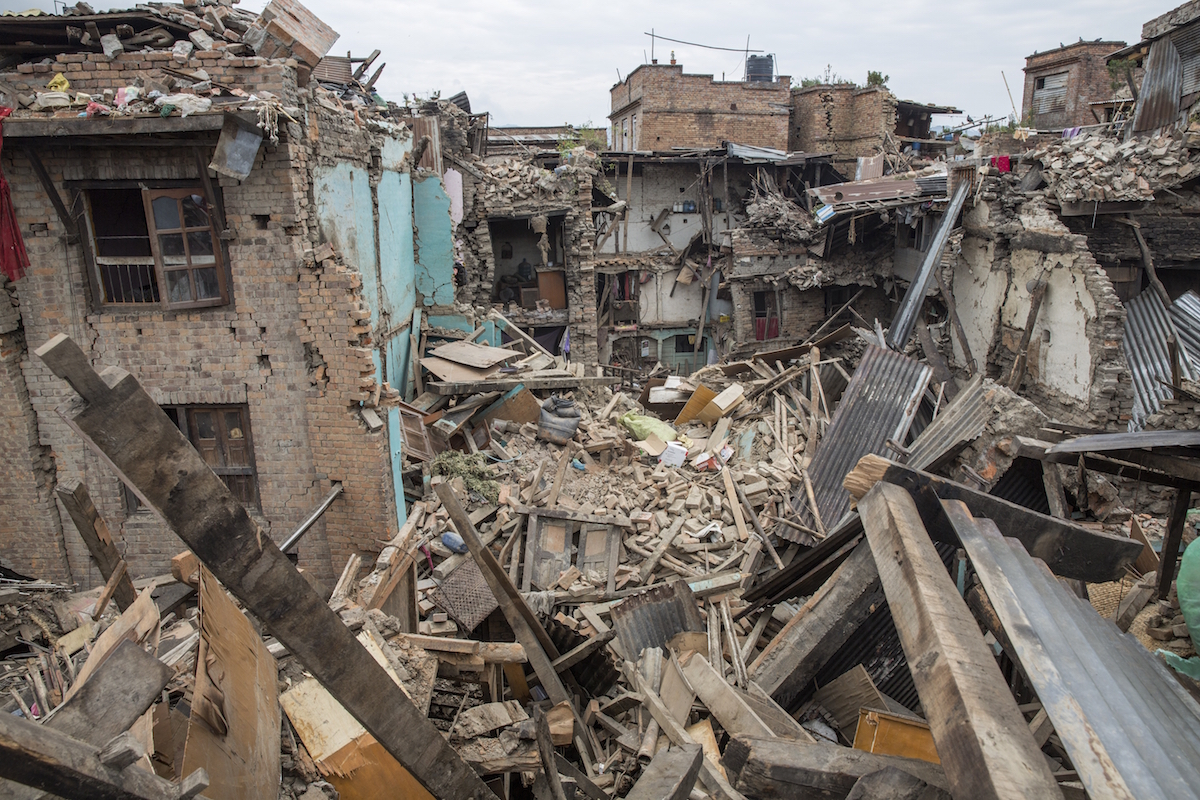 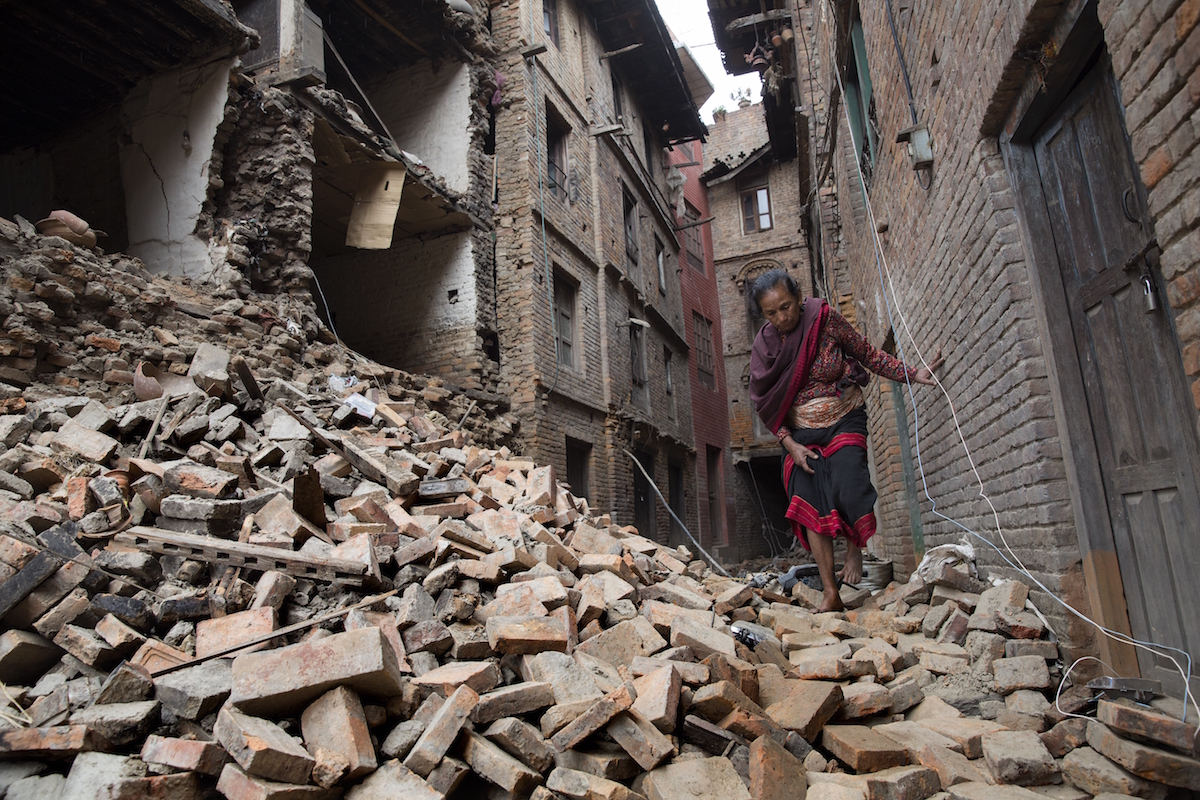 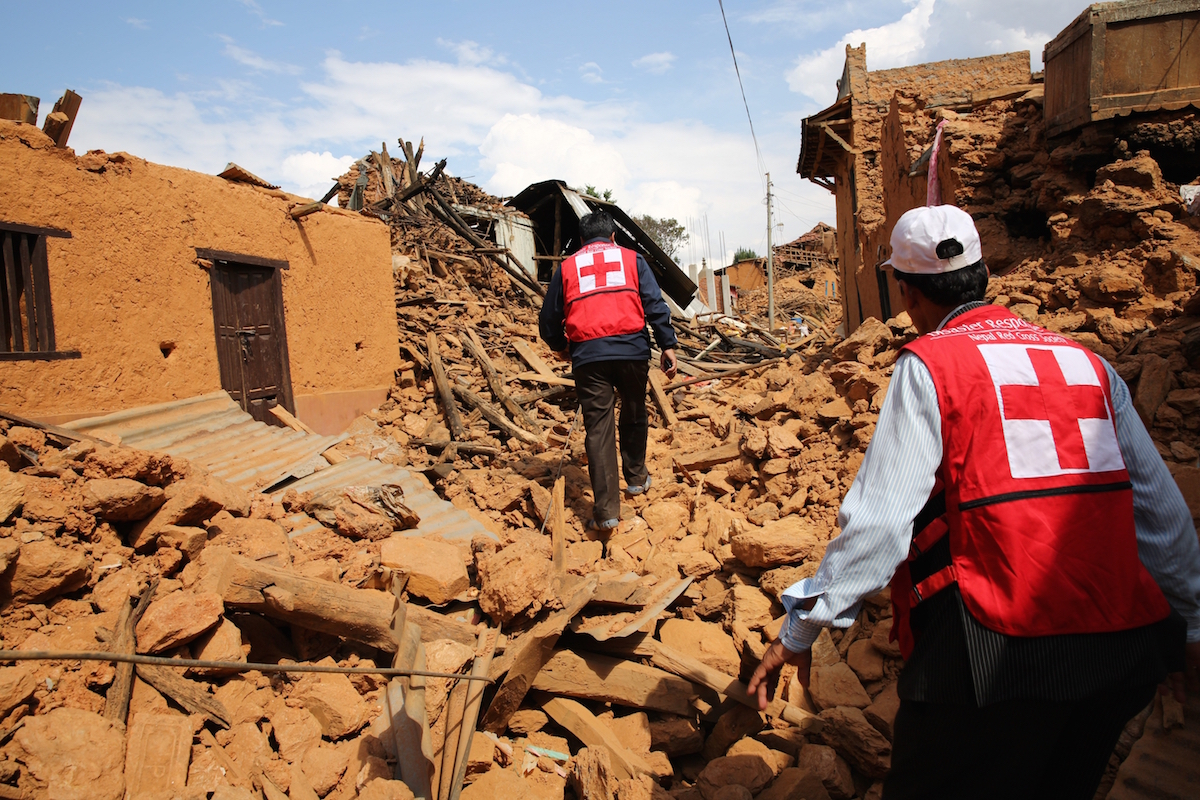 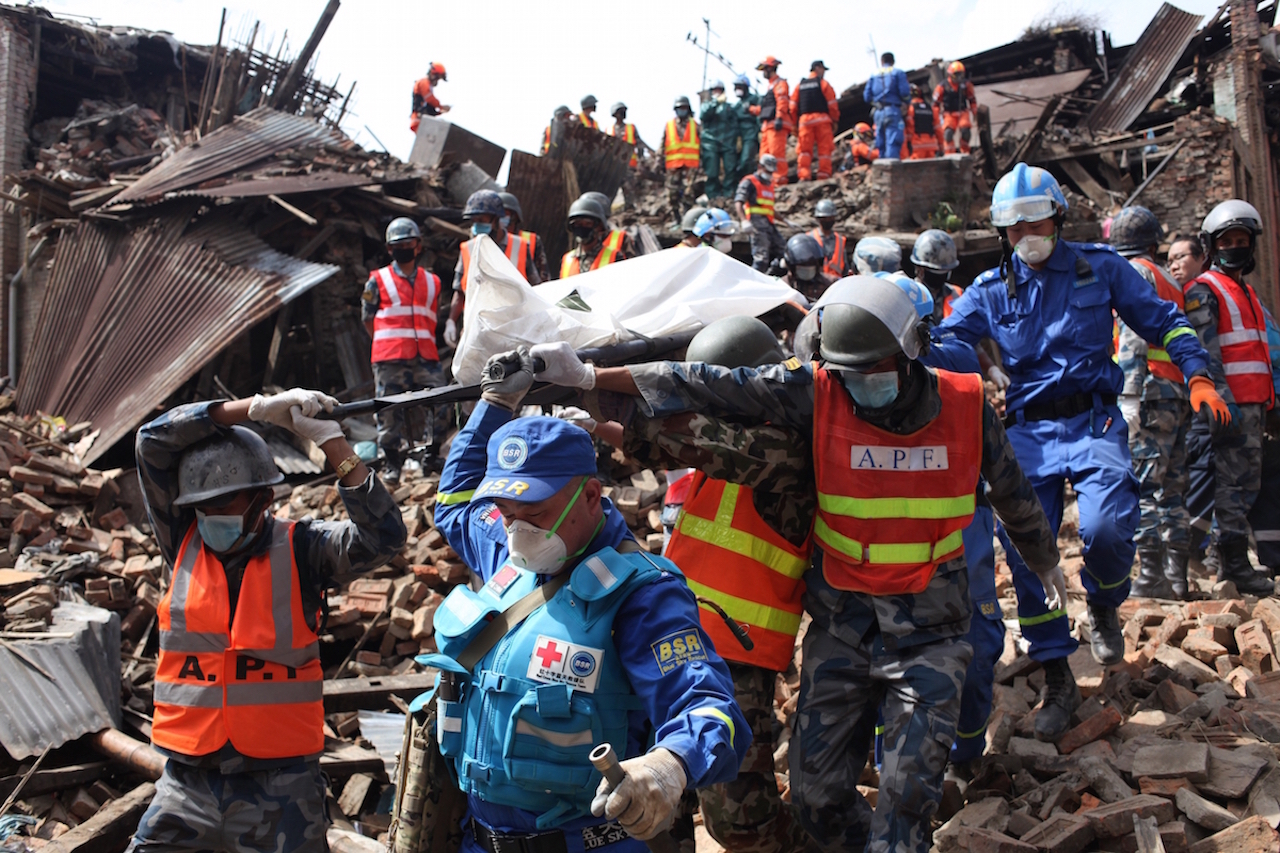 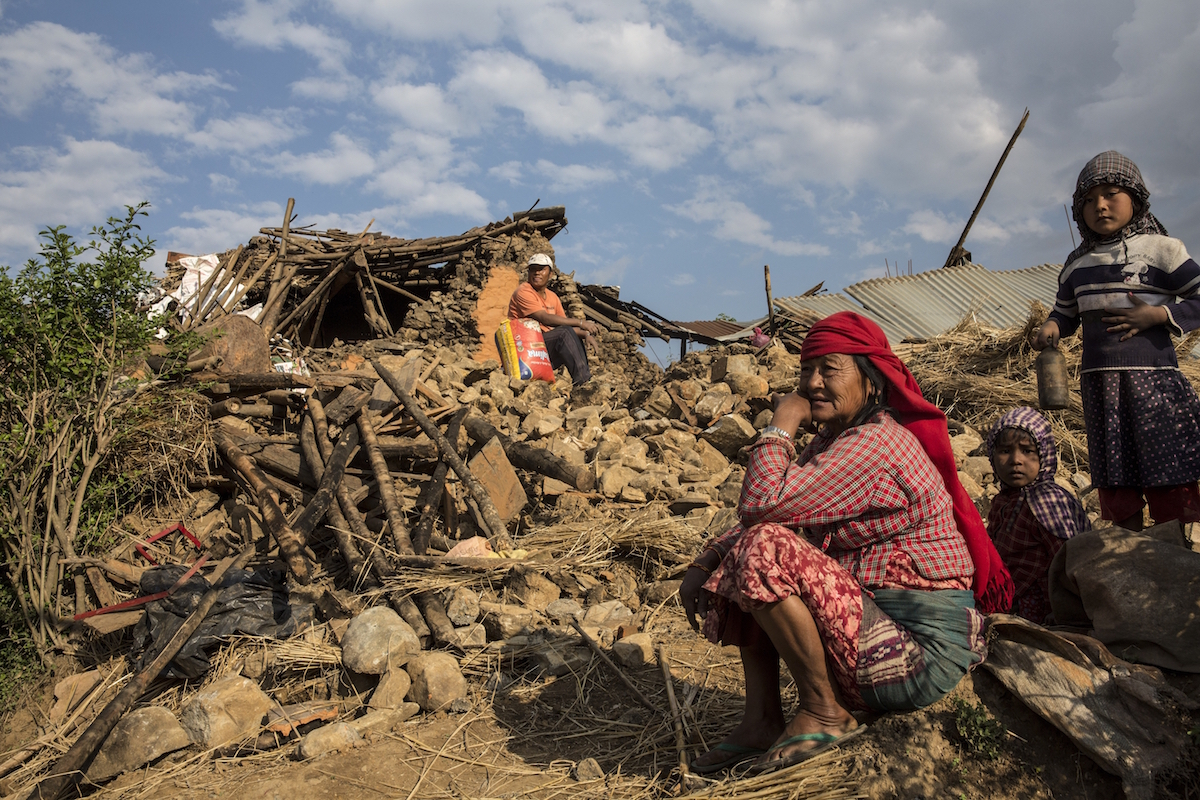 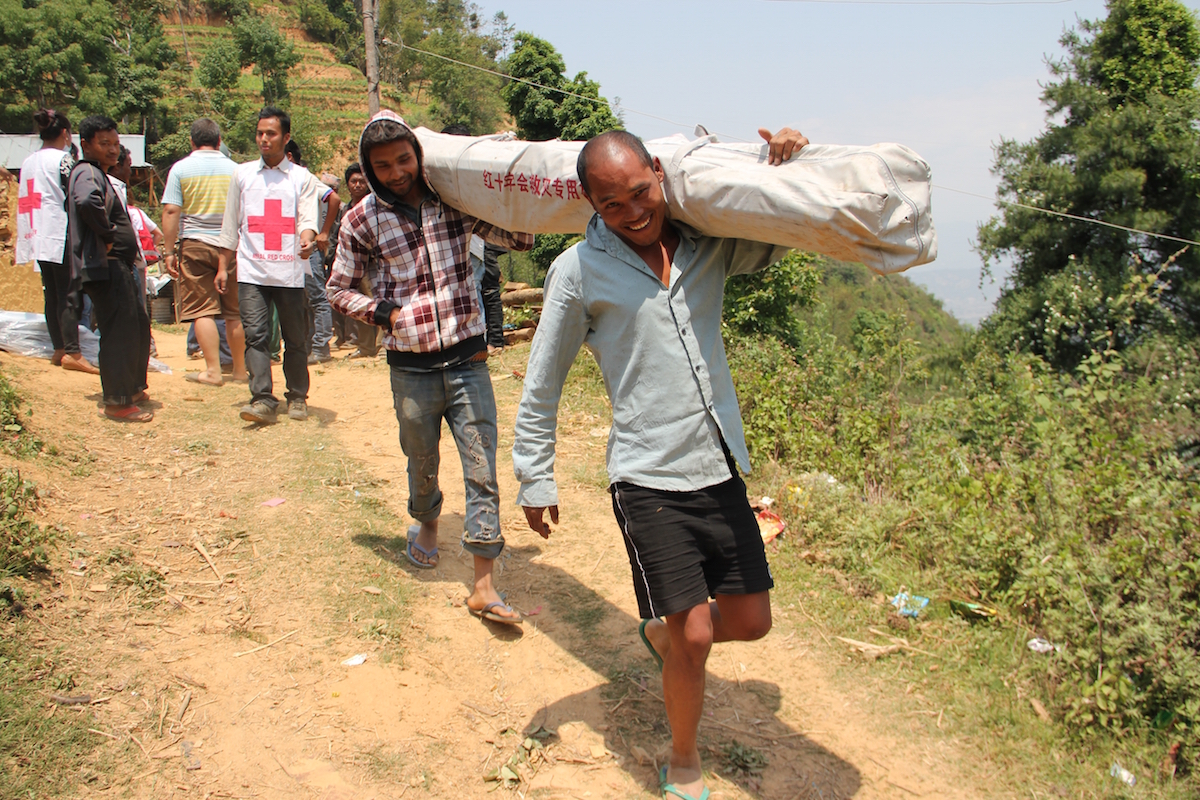 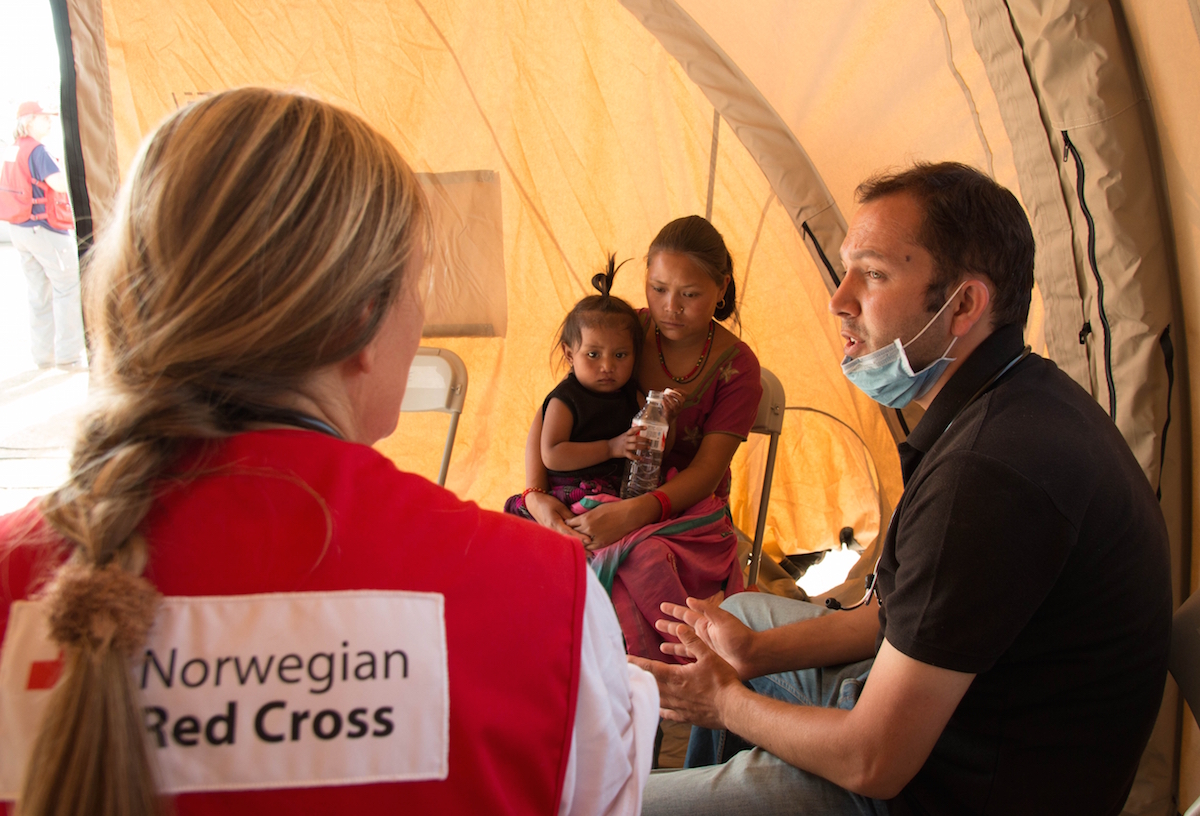 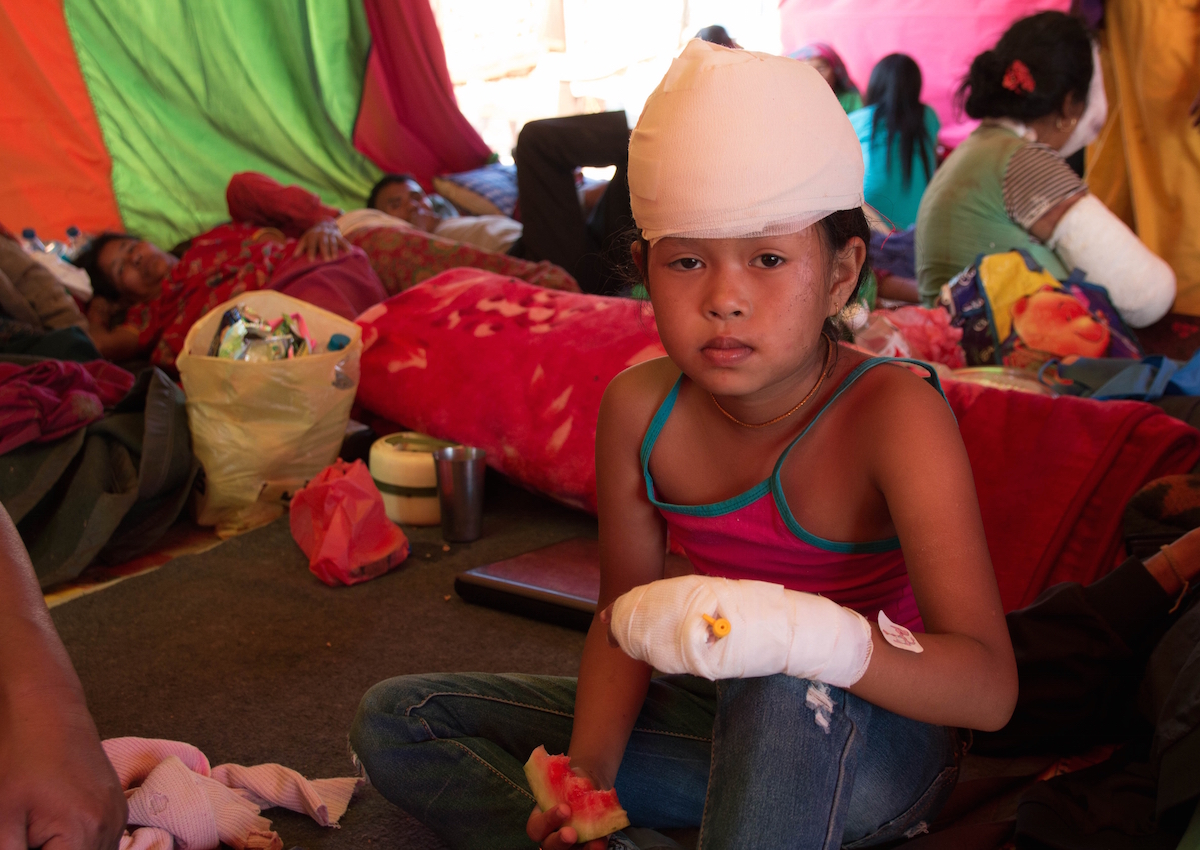 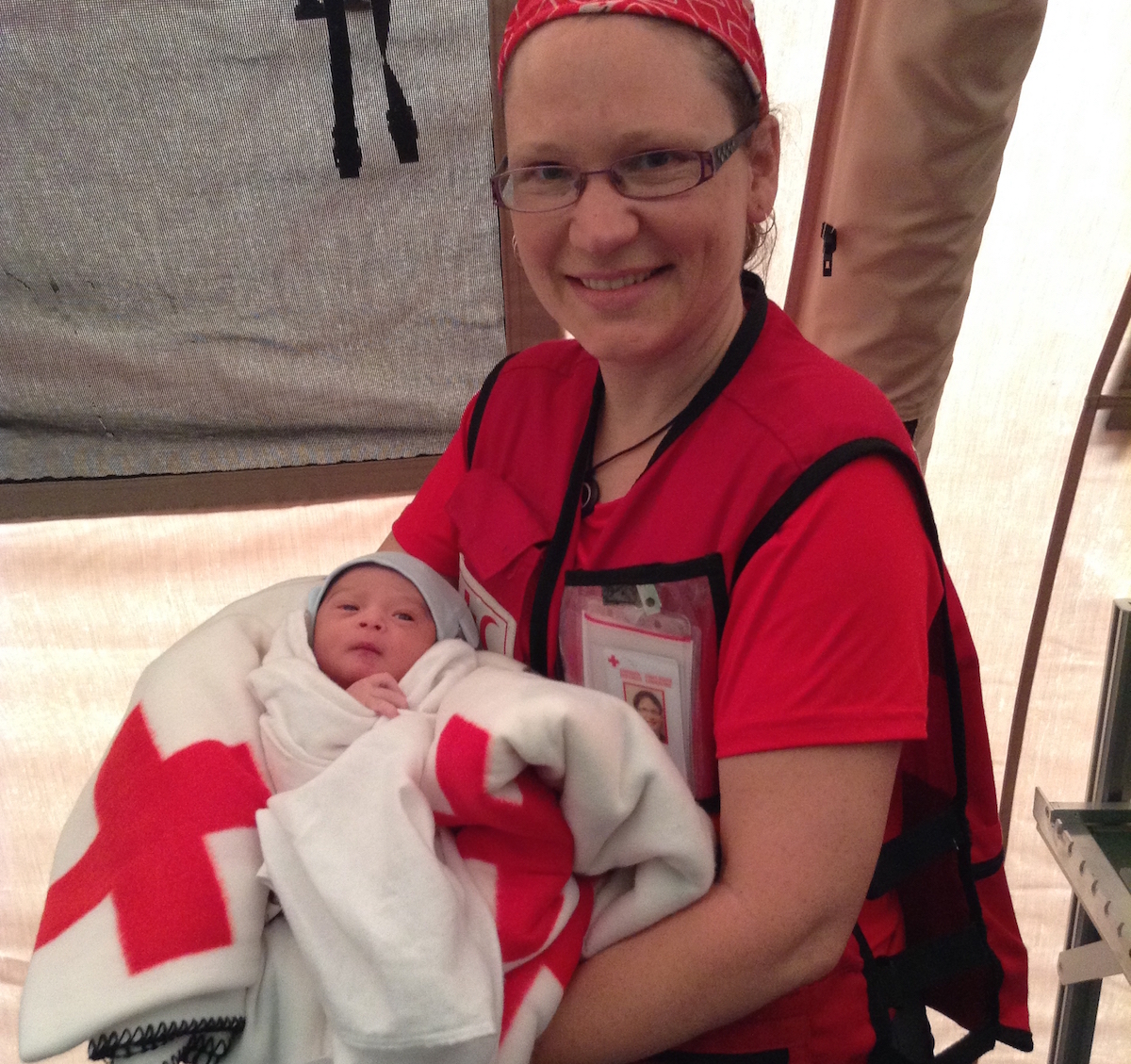 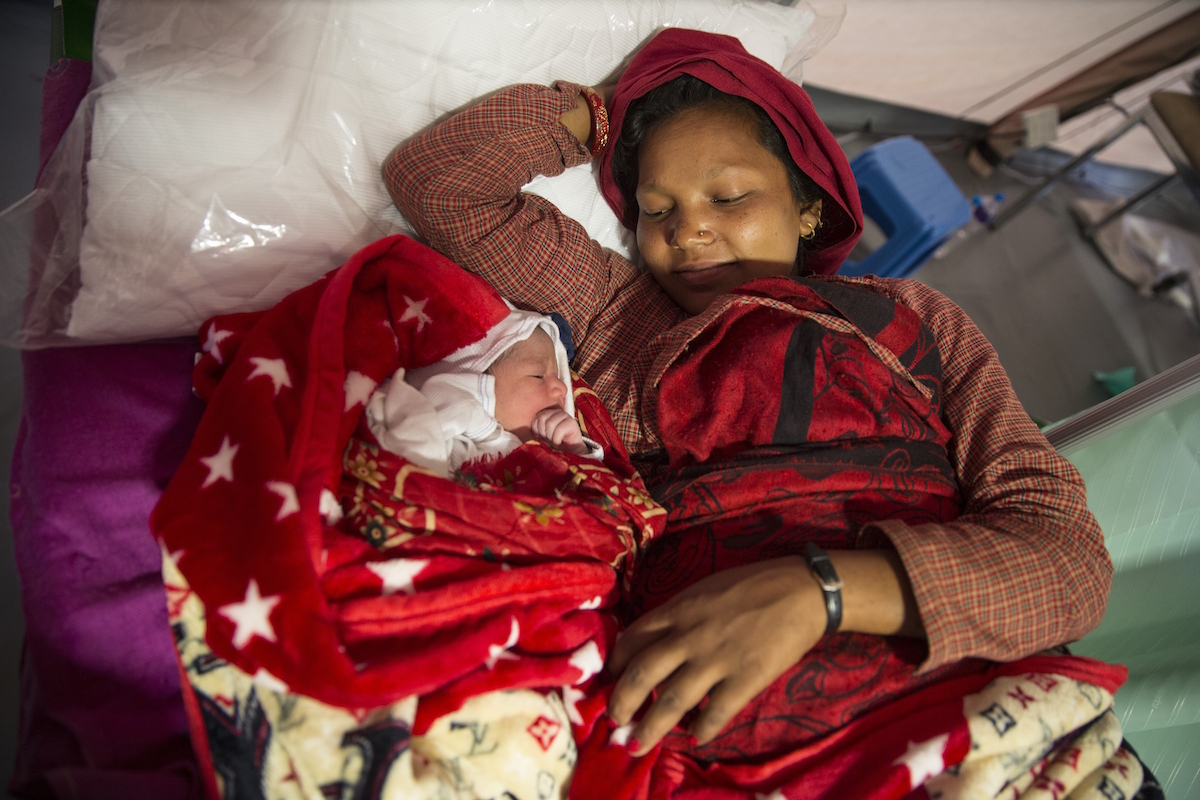 After a powerful earthquake in April, followed by repeated tremors and a violent aftershock, people in Nepal are learning how to survive, rebuild and deal with trauma as more aftershocks bring back terrible memories.

IN THEIR CRISP clean uniforms, children pick their way through the rubble on their way to school. The town of Bhaktapur was badly damaged in the two earthquakes that struck Nepal in April and May, when many died and where, in some areas, all of the houses were destroyed.

Most of the children have lost their homes; many have lost family members. But the start of the school term means a return to some sort of normality.

Bhumika and Suraj Sainju’s house collapsed when the earthquake struck but luckily all 28 members of the family managed to escape. Now, 11 of them are living in a tent provided by the Nepal Red Cross Society.

“I’m excited to go back to school,” Bhumika tells us, smiling shyly. “I will get to be with my friends and we can play together. My favourite subject is maths and I want to go and learn.”

Together with the Nepal Red Cross, Bhumika’s school had been teaching the students about what to do in the event of an earthquake. Classes included simple advice on how to prepare and protect themselves.

The class with the youngest children is being taught outside, under a canopy in the playground. The first week, the principal says, is all about building their confidence, to help them feel safe and enjoy school.

“Nearly 75 per cent of children have come back,” says Binod Rai, the school’s principal. “They are happy to be here but we need to look after their minds too — they are frightened. While they may seem fine, we are watching them closely for signs and if they are upset, we will take them aside and reassure them and make sure they are OK. I am confident that coming back to school is the right thing.”

More than 4,000 school buildings across the country were damaged in the earthquakes and many lessons will have to be held under canvas. Rai is eager to tell the students that the building has been checked by the municipality and is safe.

“Children are very resilient but many of them have been through a very traumatic time,” says Claire Groves, a psychosocial support delegate with the IFRC. “Going back to school helps to re-establish structure and a familiar routine that gives children a sense of safety and security. Being at school also provides an opportunity to be around peers and receive support, and it gives parents time to focus on the task of rebuilding their lives.”

This kind of attention to the psychological and emotional well-being of children and adults has been an integral part of the response to the Nepal earthquakes. After emergencies, people’s psychological well-being is critical to the recovery of communities who must also cope with rebuilding schools, businesses, roads and homes. Psychological support took on particular significance in Nepal after a second quake reinforced fears that another nightmarish catastrophe could unfold at any moment.

In Dolakha, a district north-east of Kathmandu the devastation around the town of Singati is paralysing. Deserted streets are covered in rubble and debris. Most of the houses are completely destroyed and the ones still standing are all badly cracked, poised to collapse at any minute.

Every so often, debris drops from smashed houses and breaks the silence. When helicopters arrive, the ground trembles. The second earthquake wrecked many roads in the Dolakha district while landslides and rockfalls mean the areas north of Singati are only accessible by air.

“The children here are afraid of the helicopters, because the sound reminds them of the earthquakes,” says Radhika Khadka, who worked as a teacher in another village nearby.

“The children here are afraid of the helicopters, because the sound reminds them of the earthquakes.”

Radhika Khadka, a teacher in a village in Dolakha, a district north-east of Kathmandu

Helping people handle their fears, a natural reaction to disaster, can help them move on more quickly and make more rational decisions should another earthquake strike. But getting people to open up and discuss their fears is not always easy.

“All of us are victims of the earthquake,” Jaya Shree Silpakar, a Nepal Red Cross Society counsellor tells a group assembled in Khalte, a remote village perched on a hill in central Nepal. “Let us come together, listen to each other’s stories. It is very necessary at this time to release our pent-up emotions. Will you do this with us?”

Silpakar has come to provide basic psychosocial support in Khalte, where some 70 women, men and children have gathered under a shelter villagers had recently built with materials salvaged from what were once their homes. The programme, carried out by the Nepal Red Cross in five districts, was born of the ICRC’s previous work with families of people who went missing during Nepal’s ten-year internal conflict.

“We try to allow people in highly affected areas to express their fear, to better prepare for living with uncertainty and to understand that their reaction is the normal answer to an abnormal event. It is a way of preventing the initial trauma from becoming chronic,” says Yubaraj Adhikari, the head of the ICRC psychosocial programme in Nepal.

In Khalte, most of the mud and stone houses are reduced to mounds of rubble. Ten people died, another 12 were injured and most of the villagers’ livestock was crushed in their sheds, while rice and millet seeds for the next planting season were caked in mud.

After Silpakar stopped speaking, there was a long silence. Talking publicly about emotions is not a Nepali tradition. Suddenly, a middle-aged man broke out in a high voice: “I have nightmares continuously. I see cracked houses, the dead walking again. It frightens me so much.”

It was as if he had opened the floodgates. Every-one started talking at the same time, confirming that they too had nightmares, they too could not shake off the fear, the pain, the constant expectation of another violent tremor. Mothers spoke of their children who were arguing all the time or keeping too silent, who had mood swings, refused to play and clung to their parents.

Silpakar, a diminutive 24-year old, let each one talk in turn, listening intently to each speaker, her face full of empathy and warmth, uttering an encouragement when it was needed.

At the end of the session, she asked the assembly to close their eyes for one minute and “think kindly of the departed souls, thank nature, which has been cruel, but has nonetheless spared us, and promise to ourselves to move forward with greater solidarity”. Silence fell again, until one, then several, children laughed. And all of a sudden, people broke into cathartic laughter.

“The young women allowed me to breathe freely again,” said Chitra Kumari Agasthi, one of the women who attended the meeting. “They made me understand that it was normal to feel the ground shaking under my feet even when there is no quake.”

The power of the movement

The earthquakes also prompted a Movement-wide response, with some 200 international staff from more than 17 National Societies playing a variety of roles. A total of ten emergency response units, including this health unit from the Canadian Red Cross, were mobilized to focus on urgent needs ranging from water and sanitation to healthcare, telecoms and logistics. As monsoon season approached, the IFRC and the Nepal Red Cross Society worked to prepare communities, pre-position supplies, train health staff and distribute emergency shelter kits, among other measures.
Photo: ©Canadian Red Cross

Estimated total cost in US dollars of Nepal's recovery.

Approximate number of people affected by the earthquake. 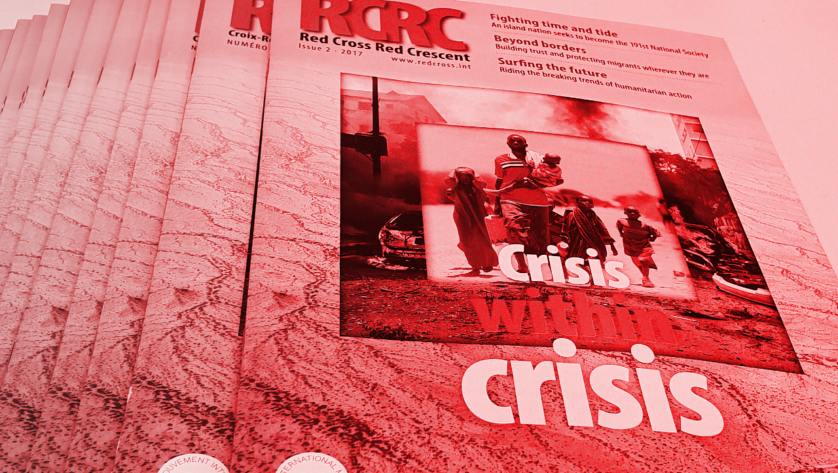