One response, one voice

Amid a deadly convergence of conflict, hunger and disease in South Sudan, the Movement is multiplying its collective impact through better coordination.

When a deadly spate of violence in the South Sudanese capital of Juba last July was followed closely by an outbreak of cholera, the two emergencies tested whether the various parts of the International Red Cross and Red Crescent Movement could work closely, quickly and efficiently under a new operating model being developed for just that purpose.

While the ICRC supported the South Sudan Red Cross in responding to immediate needs of the cholera response, the IFRC worked with the National Society to launch a series of actions supported by the IFRC’s Disaster Relief Emergency Fund. “The cholera response was conducted from day one in close collaboration and communication with all Movement partners,” says Michael Charles, head of the IFRC’s country office.

The ICRC’s cooperation delegate in South Sudan, Bayram Valiyev, adds that because all public communications were prepared collectively, with the South Sudan Red Cross taking the lead, the Movement (including the many sister National Societies operating in South Sudan) was seen as “one family”.

During crisis response, such unity of purpose poses a challenge as each organization that contributes must report to donors and public back at home about their particular efforts and results. If done well, however, fully coordinated communications show donors the full impact of the Movement response and help further gel unity within the Red Cross and Red Crescent family.

The July violence was just one episode in a larger, ongoing internal conflict in South Sudan that — along with numerous, local, inter-tribal battles — have displaced some 2 million people within the country and an equal number as refugees to neighbouring nations.

On top of that, drought pushed people in many parts of the country to the brink of starvation. While an earlier declaration of famine in two states has been lifted, almost half of South Sudan’s population is still considered food insecure, according to the United Nations. And due to a lack of access to drinking water, numerous locations around the country reported outbreaks of cholera. By mid-June, there were more than 5,000 cases countrywide and 169 reported deaths.

In such complex, long-term crises, effective coordination is especially critical. But it is often complicated by conditions on the ground. The lack of adequate roads and communication networks has made a largescale intervention even more challenging. Much aid has had to come in by plane, rather than by road, but in the rainy season, even many airstrips stop functioning.

In addition, 138 international non-governmental organizations (NGOs) work alongside more than700 local actors in South Sudan, one reason the government has advocated for a more streamlined approach, starting with the creation in 2016 of a commission to assess, register, monitor and audit the activities of all NGOs.

While such a commission may well help to ensure more people receive assistance, international governments and aid agencies have expressed concern that the laws may limit the number of foreign humanitarians eligible to work in the country at a time when needs are greater than ever.

To date, truly effective and impactful collaboration among all these actors is still not happening on a grand scale, with some aid workers lamenting that many continue to work in silos, focused on their individual contributions.

Katherine Mueller is a humanitarian, writer and communicator, based in Canada.

For this reason, the Movement is testing its own new methodologies to improve internal collaboration. Along with four other ‘country labs’ (Haiti, Philippines, Syria and Ukraine), South Sudan is a test bed for a process agreed on by all National Societies operating in the country.

Known internally as Strengthening Movement Coordination and Cooperation (SMCC), the efforts are a response to two resolutions adopted by the Movement’s governing structures and a 2015 report that said the need for improved coordination was “urgent and important and requires the commitment of all Movement partners”.

The “unparalleled outreach and the complementary roles and mandates of the Movement’s components” means it “is uniquely placed to adapt to the changing humanitarian environment”, the report notes. “But the Movement as a whole must work harder and overcome its internal challenges to increase the impact of its humanitarian response.”

This is exactly what is unfolding in South Sudan. Together, the Movement components working there have developed a Movement Response Plan that is “complementary to other actors” and “recognizes that the food security crisis… is intrinsically linked to… risks relating to health, water and sanitation and nutritional levels”.

They have also developed a joint communications strategy and issued one international appeal (under the umbrella of the ICRC) rather than the traditional approach of having separate appeals managed by various Movement components. They also continually revise Movement-wide contingency plans and map the capacity and activities of each actor within the Red Cross Red Crescent family.

A Movement coordination group, meanwhile, meets regularly to scrutinize new projects based on their necessity, appropriateness and sustainability. “We ask, ‘Does this make sense based on the needs or is it just a donor-driven activity or project that will simply collapse once the donor withdraws funding?’” says the IFRC’s Michael Charles.

“And when we communicate about our efforts, we say the Red Cross Red Crescent Movement is taking this action, not the specific National Society or ICRC or IFRC,” he says. “This makes sense because whatever one Red Cross or Red Crescent National Society is able to do here, it is the result of contributions and capacity-building efforts from many Movement partners over the years.”

It has taken years to get to this point but Nicolas Luyet, the ICRC’s head of projects on strengthening Movement coordination and cooperation, says the work is starting to pay off. “Over time, we’ve seen that Red Cross and Red Crescent partners working here are being more proactive about making sure their actions integrate well with the larger Movement effort,” he says.

“We are trying to change our internal mindsets, the modus operandi of each Movement partner, and that takes time,” explains Luyet. At times, he says, old reflexes kick in and there can still be interference from outside South Sudan or too much vertical communication between the field, regional and global offices when “coordination belongs at the country level”.

The costs of coordination

These reflexes are understandable. As the 2015 Council of Delegates report noted, “efficient coordination is demanding, time-consuming, requires specific skills and commitment, and comes with a cost”.

One cost of the single international appeal, says John Lobor, secretary general of the South Sudan Red Cross, was lost time. While some emergency funds were available to help the most needy, the process of crafting a joint appeal took about a month, potentially delaying help for populations in need, as well as the Movement’s reputation as a timely deliverer of comprehensive assistance. Once the appeal was launched, however, Lobor says the South Sudan Red Cross (with its 8,800 volunteers) was able to help far more people due to better collaboration with Movement partners.

Lessons learned from all the country labs that are part of the SMCC process will help inform further discussions at the Council of Delegates in November, in Turkey. The idea now is to consolidate and share the lessons learned so that better coordinating mechanisms, appropriate for each context, can be developed at the onset of emergencies and improved over time.

“Efficient coordination is demanding, time-consuming, requires specific skills and commitment, and comes with a cost.”

From the 2015 report Strengthening Movement Coordination and Cooperation (SMCC), optimizing the Movement’s humanitarian response.
Like (399)
Applause (407)

Previous
Uniting for humanity
Next
A race against time and tide 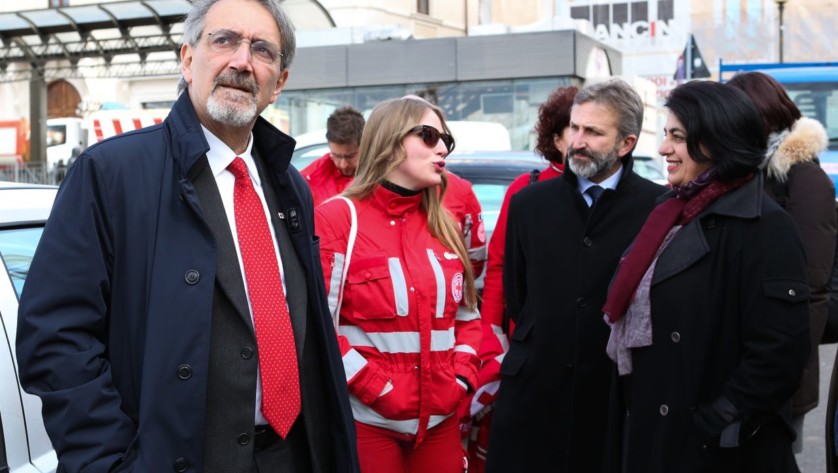 Medicine for the heart

A guided tour with IFRC President Francesco Rocca through an ancient city being rebuilt.